I never thought hearing my name and the phrase ‘the back of a bus’ in the same sentence would give me pleasure – but it really did!  I didn’t see it, but I believe my image, well the image of my scarf on a beautiful model, appeared on the back of a bus in promotion of the National Crafts & Design Fair in the RDS last week – thanks Carl for letting me know!  We had a great show, and I know it was helped by this entry (same image as used on the bus) in the Gift Guide Magazine which was available at the fair and circulated earlier in the week with the Irish Times in Dublin.  A great way to finish the year! 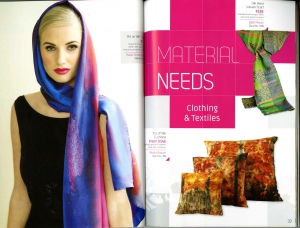