Bramber Studio – 10th Anniversary Celebrations!
It’s hard to believe that it’s 10 years since we first opened the doors of Bramber Studio, it certainly doesn’t feel as long as it sounds!  So we decided to throw a party to say thanks to those who have supported us – the sun shone and the chat and music flowed!  Not everyone could make it, of course, and we received some lovely cards and messages from those who could not.
Here’re some photos and the piece from our local paper, the Midland Tribune. 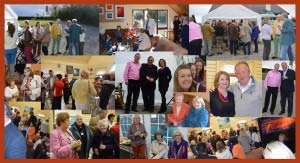